With the Coronavirus coming around, so many of us are forced indoors for a time, forced into isolation where digital tools will be forced to become the norm. We’re already seeing things like Netflix Party gain immediate popularity or exercise programs like Ring Fit Adventure sell out suddenly. I was struck by the similarities the pandemic response and social distancing has had to the year following the World Trade Center disaster. We all went inside, purchased a ton of food to make at home, and began to rethink about what was important in life.

Almost all of the reasons I went into academia came out of this time, the period of work between 2001–2009 when the magic of virtual worlds, of virtual life, set the world on fire.

A long time ago, I found a blog called Terra Nova in a google search about Final Fantasy 11 (FFXI). I was a student in a community college in Austin, Texas playing FFXI and trying to figure out what to do with my life after 9/11 destroyed my dreams of becoming a biblical archaeologist. Trying to make sense of what virtual worlds meant to society seemed to be a tremendously useful project. 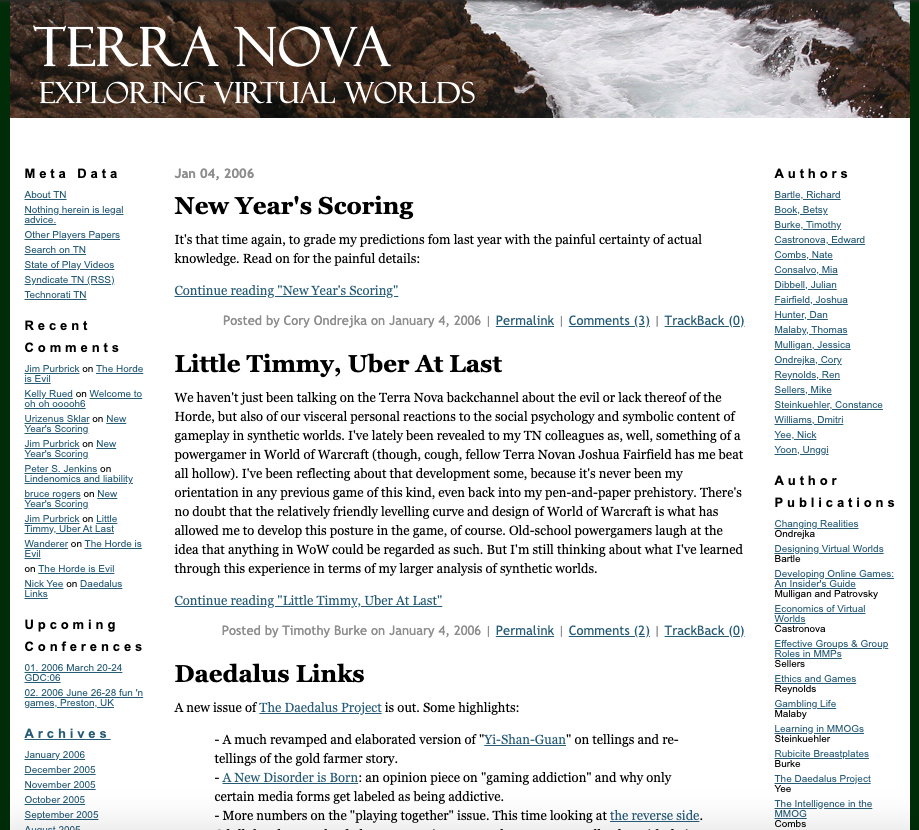 Yet, as I fought my way through school, all of the promise for this space faltered. The papers slowly disappeared from prestigious journals. We moved on to gamification and mobile devices. Eventually, papers that lamented the loss of that spark in virtual worlds all but signaled that the study of virtual lives was completely over.

Besides mobile devices, the work that took the place of virtual worlds has been a growing body of literature that not only laments the loss of the social in the virtual, but also signals that much of the promise had completely failed or been corrupted. This item would evolve from studying trolling in games to studying the proliferation of online harassment.

So as I continued adding letters to the end and beginning of my name, I evolved with what would become of virtual worlds. I got my PhD in Information Science in 2018 and have been pushing in my career for things like, remembering the past that inspired Dungeons and Dragons, how digitizing board games shifts the formation and control of networks, and how the history of how we’ve used maps in video games tends to be a lot different from how we use maps normally.

All of these ideas are fueled by a desire to balance 2 things:

It’s no surprise that much of the tension between these two forms the basis of the culture war.

But at the center of the tension is a growing pressure, a growing fragility that technology represents. We were (are and have been) engineering ourselves into an ever more precarious position culturally, interculturally, interdisciplinarily, and physically. So while I was initially fascinated by the virtual worlds, by the virtual self. What came out of that fascination was an understanding that there was an ever-growing possibility of uncontrollable confusion, collapse, destruction, and disaster. So I moved from trying to understand the remnants of virtual world studies to the study of crisis, disaster, and emergency response.

But that is not a simple leap. In fact, it is somewhat of a juxtaposition, an implied correlation without causation. Yet the evidence of the growing danger can be seen quite clearly over time. I have struggled to find inroads into understanding the relationship. That struggle can be seen in just about everything i’ve written. It often gets suppressed in subtle (less subtle gets rejected) ways because I have to focus my work in the ways academia accepts.

For example, I wrote about remembering the past that inspired D&D, but focused heavily how that past fostered map technology arms races resulting in computation being created by the military. D&D was just a good way to dig into military training and potentially how we came to teach folks how computers worked.

I wrote about how digitizing board games influences network formation but the goal was to create new methods to understand how society functions with that technology. This was directly related to the great virtual world experiments I started into academia with and my own struggles to understand Actor-Network Theory as a way to see the world. Specifically, I wondered how to show network creation and the antagonistic tendencies of life.

And finally, I wrote recently about understanding video game maps, but with a goal of finding new possibility spaces for map uses for games like Pokémon Go or for indoor-based mapping technologies for first responders and search and rescue operations.

I keep writing about history, about reconsidering history, and about focusing on the future by understanding that our analyses are history-oriented.

And then the Coronavirus came, we were forced inside, to separate from our physical groups, and suddenly all this old virtual worlds stuff came flooding back.

Many of the reasons research on virtual worlds began to float away into obscurity were pretty straight forward. Folks lost interest, lost the magic these games held. Yet, it was something more practical I think. It had to do with who was in control of the games themselves. The user lost control of their community in the virtual world they inhabited. In its place was installed “user experience” engineering meant to tweak every action revenue generating experience that would keep folks playing. This was reflected not only in video games, but in internet-based communities writ large.

I think I can point to a couple other pieces of evidence. It began with a long-winded discussion between a guild in Everquest and Brad McQuaid, maker of Everquest. This event has been called “The Most Important Event in Raiding History” (snagged from ElitistJerks long ago) which can best be summarized as the moment in time where the control of in-game life became the provenance of the game creators rather than of the game players. It was a little slow to fully manifest as there was still tremendous benefit to socializing in (then) new games like Final Fantasy 11 or World of Warcraft a few years later. Yet each of these experiences grew stale.

If I were to point at a specific event where things really shifted, I’d probably point to this specific raid.

This video as the moment in time where WoW began to lose the affordances and features that made it a social game, where the things McQuaid did finally cemented in one game, with one company at the helm and in control of the market. No longer could I be a weirdo to people in the game world. No longer did I have to labor harshly to achieve fortune and glory. All that was left was to push a button in town and gain experience, repeated from beginning to maximum level. This was reflected in other games like FFXI that were left trying to re-create a game made for the virtual world concept into a game for single players to enjoy.

And so, with nothing left to do but play a solo game collaboratively, all that was left was to do things like trolling via chat, trolling via finding folks outside of the game, and trolling in an ever escalating, ever more sinister act. In bleeding outside of games, the growth of toxicity was not only inevitable, but predictable. And all we’re left with is trying to figure out how to do something to stop it or to try and reverse it.

But at the core of this is a particularly important problem: academia, technology development, and marketing went from trying to understand and foster the occurrences and trends of this space to something else (it was mobile devices). The loss of this attention allowed the toxic stuff to fester, to grow stronger, and become a contagion in and of itself. So when you see posts like, Terra Nova slowing down, we see the start of a process that became something else. Something sinister.

Yet, we’re dusting it off. We’re actually stuck with the tools that appeared during the heyday of the virtual life. We got video chat, voice chat, video/voice chat, and emojis, so many emojis. We got virtual whiteboards, automatic broadcasts, and huge, far-reaching abilities to share what we see on our screen. Everything we have now is what we had in 2005 but with great fidelity and so many more restrictions, privacy invasions, and monetizations. 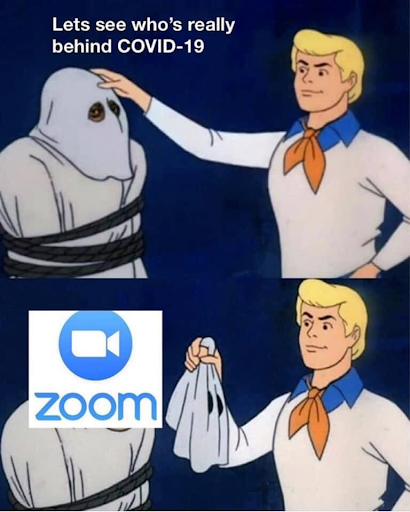 We’re currently kicking up a ton of dust.

The dust is that we never actually figured out the potential of the virtual world. Our virtual selves have been scared, hiding in the closet for over a decade now from trolls and trolling. We never figured out how to integrate that virtual self into everyday normal life…only, we did with mobile devices and social media. It too is a weird, scary boogeyman or troll.

Just weeks ago, I sat through another MIT professor saying the same thing as Robert Putnam and Sherry Turkle. It’s “killing” us somehow, it’s “killing what makes us human.” At some point, that thing that was killing us began to have white male faces. That “thing killing us” is (or maybe was) a random angry internet denizen who figured out your address.

And that boogeyman is now manifested as an actual virus. The idea that any of us could be an actual danger to others is so powerful that we’ve begun to horde virus killing soap and wipes. That that fear seems to be transferring to something else, somewhere else. Now that it’s there, can we get back to the integrating our virtual, or non-human, and human selves so we don’t have to be shocked at how bad our options are when the earth reminds us that we just live here?