In Austin, Texas about 6 or 7 years ago there was this strange rebirth of alternate ways of making and riding bicycles. Most would associate this with the generally weird and purposefully alternative atmosphere that makes Austin…weird. But as these bikes rode around town, people began to talk about how nostalgic these bikes were. It was as if they came from a different time, a time when the bicycle may have had a different future, a different look. It is with this nostalgia that we take a different sort of trip to a place where the future of video games could have been a different one. In this future, we will begin with Ian Bogost’s A Slow Year. 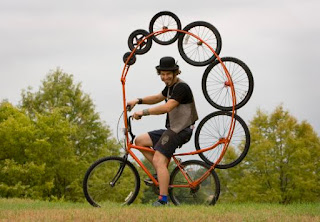 How things change and how technologies diverge or converge over time is a constant topic of discussion when a product gains a permanent foothold in culture. The fervor of this conversation fades quickly as that particular technology gains a universal, almost invisible status until it is finally displaced by something new. There, the cycle begins all over again. In our age of nostalgia, this is becoming more and more common, especially in popular culture. The easiest example to use is the movie Super 8 and the way it tried to capture our nostalgia for E.T. by taking Spielberg’s work and attempting to bring a sense of the present from the past.

There is almost a desperation to this furious re-working of nostalgia. Re-using ideas has never been as obvious as it is right now as we enter into HD Remakes, Re-boots, and alternate realities for characters who have been around for centuries. The desperation behind all of this feels a little sad, almost fleeting. It is as if the Phillip Larkin poem, “This be the verse” has somehow inserted itself into the fabric of capitalism:

“They fuck you up, your mum and dad. They may not mean to, but they do. They fill you with the faults they had. And add some extra, just for you.”

You could say that the re-make craze currently happening is an attempt to take our parents faults and remake them into our own. It feels somehow shallow, somehow incomplete because we don’t all have children of our own to pass things off to…especially when you consider how different video games feel now compared to when our parents may have played them (not very different).

So what does any of this have to do with an Atari 2600 game Ian Bogost released in 2010? Well, at least for this reviewer, the experience of this game really made me wonder about how video games have developed throughout time. In particular, I wondered if something have gone differently that would have allowed games to leave the “masculine” space they currently exist in? 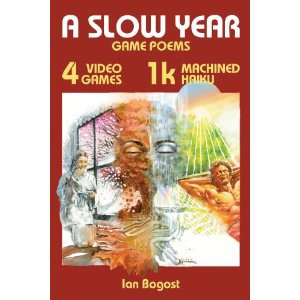 With that in mind, let me explain what a gamer does in A Slow Year. In short, this game is simple enough to explain. There are 4 different “games,” each representing a season. Each season is a digitized poem, represented by a series of what could only be referred to as “meditative actions.” In the fall, we watch the leaves fall off of trees, in the winter, we sit at a table sipping coffee while looking out at the freshly fallen snow. Each season is governed by the gamer’s need to press a button but for me, I felt like it wasn’t needed. A Slow Year is about meditating.

In fact, this meditation is augmented by poetry generated by a machine. There are 1000 machined Haiku (the earliest conceptualization I know of this is from Margaret Masterman and Robin McKinnon-Wood in 1968). These poems are unique and actually far more complex when meaning is attempted to be applied to them than the poems people make when they write in the Haiku book I have in my bathroom for guests to write in. One of my favorites is Poem 216:

A Slow Year takes the assumptions of our present world, ones that we seem to be trying to do something with through all of these re-imaginings of older times, but doesn’t try to re-establish them with the technology as it is now. Instead, A Slow Year tries to ask a question of us all - What would have happened if games like A Slow Year had been created when this type of game was the technological equivalent of Crysis?

Unlike all of the things this game made me think of, A Slow Year isn’t about nostalgia, it is about regret. In the trying times we exist in currently, A Slow Year asks us if we had started down a different path, would we have managed to get to this exact same place?

Probably not. If we take the gamer as they exist today, I do not believe this game would resonate with them. There is not really a lot of modern gameplay here, no achievements, nothing more than pressing a button or moving a cursor to catch leaves. This makes the game something of an anomaly because A Slow Year is something that gamers need. We need to be reminded that virtualization of procedure, of the world around us, of our fiction, need not always be imbued with war and competition.

A Slow Year can be purchased from Open Texture and re-purposed Atari Cartridges by contacting him through the various ways people can contact each other.